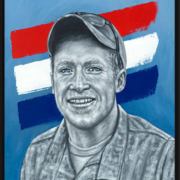 Nick Roush (“Nicky,” as he was known to his family) was born January 19, 1987, in Middleville, graduated from Thornapple-Kellogg High School, and attended Kalamazoo Valley Community College.

While conducting combat operations in Herat, Afghanistan, on August 16, 2009, Nick died of wounds suffered when an improvised explosive device detonated near the vehicle in which he was riding.

He is survived by his parents, Robert and Donna Roush, and brothers Bobby and Kyle.