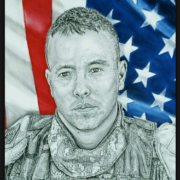 He entered the Army National Guard between his junior and senior year in high school and served with 1st Battalion, 125th Infantry Regiment, first in the Sinai Peninsula of Egypt and later in Iraq.

Chad was killed December 23, 2006 when an improvised explosive device detonated near his vehicle during combat operations in Salman Pak, Iraq. He was posthumously promoted to Sergeant.

He is survived by his parents, Sandi and Terry Vollmer, and his sister, Heather.